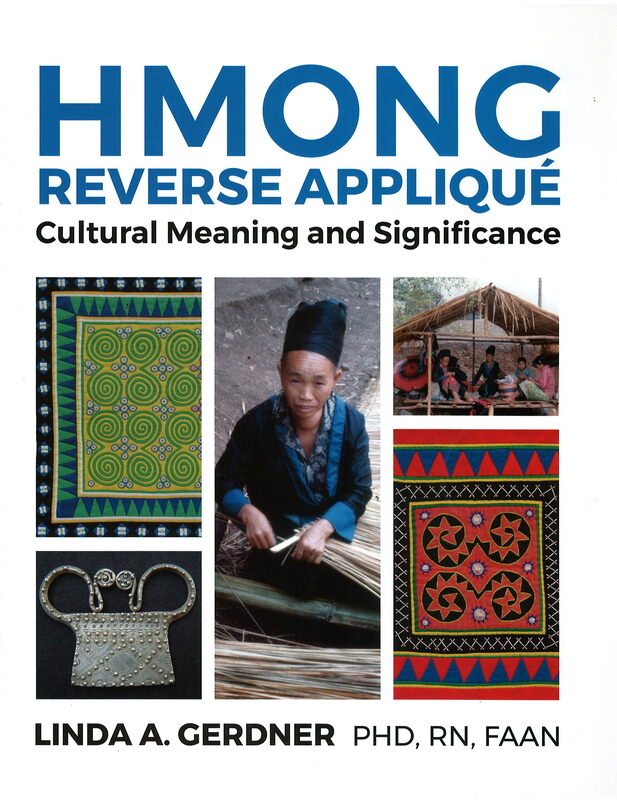 This book provides a groundbreaking exploration of the historical significance of Hmong reverse appliqué and circumstances that led to the development of this unique textile art form. Made by members of two Laotian Hmong sub-groups, the White Hmong and Striped Hmong (named after their distinct styles of clothing), reverse appliqué is a complex form of needlework traditionally used to decorate clothing. It also serves as a form of group and social identification.

Many of the beautifully photographed examples in this book were made during a time of upheaval for the Hmong, when they were displaced to refugee camps in Thailand due to the Vietnam War, that covertly extended into Laos in 1961. Those Hmong who fought on behalf of the U.S., were forced to flee their homeland after the 1975 communist takeover of Laos. During their time of exile and confinement in refugee camps, Hmong women expanded their needlework skills in reverse appliqué to form a new textile art that involved the creation of abstract, geometric designs based on culturally significant symbols and motifs. Money generated from selling these items was used to purchase needed supplies for survival under substandard living conditions while waiting relocation.

As Hmong refugees began to resettle abroad, most notably in the United States, needlework skills declined and reverse appliqué became a dying art. This book serves to document the history, practice, iconography, and significance of a folk art deeply embedded in the Hmong experience. It will preserve the memory and knowledge of an art form integral to an immigrant group that is now woven into America’s cultural fabric.

About the Author
Linda A. Gerdner PhD, RN, FAAN pioneered the development of individualized music for persons with dementia (such as Alzheimer’s disease). She began this work in the early 1990s and has won national and international awards for her contributions. Her work has been the impetus for further testing by researchers and clinicians across the globe.
She developed an evidence-based protocol for the use of music in this population, now in its 6th edition. "Musical Memories" incorporates basic principles of this protocol to empower Gabrielle in maintaining a relationship with her grandmother. See website listed below for free resources to enhance the educational value of "Musical Memories."
https://gerdnerlinda.wixsite.com/musicalmemories
--------------------------------
Linda A Gerdner PhD, RN, FAAN is a former Ethnogeriatric Specialist for the Geriatric Education Center at Stanford University. Her overall focus of research is family caregiving issues in persons with dementia (i.e. Alzheimer’s disease). A portion of these efforts have focused on family caregiving issues of Hmong American elders with dementia and other forms of chronic illness. To provide a deeper understanding of the culture, in 2002, Dr. Gerdner visited three Hmong villages located in Xieng Khouang, a rural province in northern Laos. During her travels she also visited the sole remaining Hmong refugee settlement, at Wat Tham Krabok, in Thailand. Findings from her research in the United States indicated the need for culturally responsive teaching materials on the topic of Alzheimer’s disease. As a beginning effort, she is the first author of a bilingual picture book, Grandfather’s Story Cloth, for Hmong American children and their families. This book has received 6 national and international awards and honors. As part of her research with chronic illness she also spent ten years working with a variety of shamans, care recipients, family members; and attended a variety of shamanic healing ceremonies. This led to the comprehensive, cutting edge publication, Demystifying Hmong Shamanism: Practice and Use by Hmong Americans Across the Lifespan. Her interest in the Hmong culture also led to a large collection of textile folk art that resulted in publication of Hmong Story Cloths: Preserving Historical and Cultural Treasures. This book was nominated for the R. L. Shep Book Award for Ethnic Textile Studies. More recently, she is a co-editor with Drs. Gwen Yeo and Dolores Gallagher-Thompson for Ethnicity and the Dementias (3rd Edition).